The Department is offering vaccination to eligible New Yorkers who may have been exposed to monkeypox, starting today at a new vaccination site at the Chelsea Sexual Health Clinic.

Eligible individuals can schedule an appointment at nyc.gov/health/monkeypox

June 23, 2022 — The Department of Health today announced the opening of a temporary clinic to administer the two-dose JYNNEOSTM vaccine to eligible individuals who may have recently been exposed to monkeypox. Getting vaccinated soon after an exposure reduces the risk of developing monkeypox and may reduce symptoms for those who catch it. The vaccination clinic will be located at the Chelsea Sexual Health Clinic (303 Ninth Avenue in Manhattan). The clinic will open today and will be open Mondays, Tuesdays, Thursdays, Fridays and Sundays from 11 a.m. to 7 p.m. to advance.

Anyone can get and spread monkeypox, but most cases in the current outbreak are in gay, bisexual, or other men who have sex with men. The health department, in conjunction with NYC Health + Hospitals, is already offering a vaccine to people identified as close contacts of someone suspected or confirmed of monkeypox. New vaccination clinic expands eligibility to all gay, bisexual and other men who have sex with men (cisgender or transgender) ages 18 and older who have had multiple or anonymous sexual partners in the past 14 last days. The Department of Health has issued guidelines for eligible adults considering vaccination so they can better understand their personal risk level. Men who have sex or other intimate contact with men they have met through dating apps or social media platforms, or at clubs, raves, sex parties, saunas or other large gatherings may be at higher risk of having been recently exposed. Appointments are recommended, but a limited number of walk-in visits will be accepted. Make an appointment at nyc.gov/health/monkeypox.

“As I have said from day one, we are prepared, not panicked, and this monkeypox vaccination site is one more essential tool to keep New Yorkers healthy,” the mayor said. New York, Eric Adams. “Starting today, eligible New Yorkers who may have been exposed to monkeypox can now get vaccinated to stay safe and slow the spread.”

“Members of the LGBTQ+ community have always been strong advocates for their rights, including, and especially, when it comes to receiving timely access to health care,” said Health Commissioner Dr. Ashwin Vasan. “The monkeypox vaccination is an essential tool for New Yorkers to protect themselves and to help slow the spread of monkeypox in our city.”

“We commend the New York Department of Health for leading this effort to reduce the risk of transmission, especially among communities served by Callen-Lorde,” said Peter Meacher, Callen-Lorde Community Chief Medical Officer. Health Center. “While this is an important step, it is equally essential to remember that identity is not a risk factor, and we must all be vigilant not to stigmatize communities who may be disproportionately affected. During Pride Month in New York City, it is especially important to acknowledge the long history and impact of stigma, and not repeat the mistakes of our past.”

“TAG welcomes DOHMH’s announcement of a temporary monkeypox vaccination clinic at the Chelsea Sexual Health Clinic in Manhattan, aimed at vaccinating men who have sex with men (cis — or transgender) who have had anonymous or multi-partner sex in the past two weeks,” said Mark Harrington, executive director of the Treatment Action Group. “We cannot afford to delay and deny access to effective tools to prevent and treat an outbreak such as MPX when there are scientifically proven vaccines, treatments and testing protocols that, when they are used together and fairly, can bring this epidemic under control everywhere.”

“As Vice President of Infectious Disease and LGBTQ+ Programs at the Community Healthcare Network (CHN), I strongly support monkeypox vaccination for those eligible,” said Dr. Freddy Molano. “As a network of primary care centers that have always proudly served LGBTQ+ populations in New York City, CHN believes in sexual health and safety for all. CHN encourages those eligible for the vaccine to protect their own well-being and that of their partners by being vaccinated against monkeypox.”

The monkeypox virus is most commonly transmitted through direct contact with a rash or wounds of someone infected with the virus. It can also be spread through contact with clothing, bedding, and other items used by someone with monkeypox, or through respiratory droplets that can be transmitted during prolonged close contact. Transmission can occur through sex or other close physical contact. 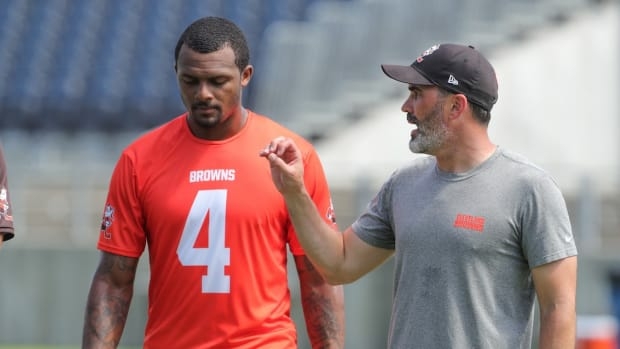 Read also :
Deshaun Watson reports to Browns training camp as he awaits sentencing
Editor’s note: This story contains reports of sexual harassment. If you or…

Symptoms of monkeypox usually begin seven to 14 days after exposure, but may not appear until after 21 days. The most common symptom is a rash or sores that may look like pimples or blisters. These can be all over the body or only in certain parts, such as the face, hands, feet, mouth, genitals or anus. Before or at the same time the rash or sores appear, some people experience flu-like symptoms, such as fever, swollen lymph nodes, headache, and fatigue. In some cases, monkeypox can cause serious illness. A person is contagious until all sores have healed and a new layer of skin has formed, which can take two to four weeks.

This may interest you :
How Does Amazon’s Acquisition Complement One’s Health?
Amazon is a name you probably associate most with e-commerce. Now the…

To reduce the risk of getting or spreading monkeypox, do not have sex or other close physical contact (such as touching, massaging, or kissing) if you or your partners are sick, and especially if you or they have a new or unexpected rash or sores anywhere on the body. Avoid gatherings and direct contact with others if you are unwell or have a rash or sores. Wash your hands, sex toys, and bedding before and after sex or other intimate activities. See the article : East Baton Rouge Parish Receives $ 1 Million for New Mental Health Initiative. As more and more New Yorkers are being diagnosed with monkeypox, it is crucial to seek medical attention as soon as you notice a rash or sores. If you don’t have a healthcare provider, visit NYC Health Map or call 311 to be connected to care.

The JYNNEOSTM vaccine has been approved by the United States Food and Drug Administration for the prevention of monkeypox in persons 18 years of age and older. The vaccine requires two doses, four weeks apart.

Sexual Health Clinics and the Department of Health’s Telemedicine Hotline provide inexpensive or free services for sexually transmitted infections, including HIV, to anyone age 12 or older, regardless of their immigration status (parental consent is not required). The sexual health clinic hotline is available at 347-396-7959, Monday through Friday, 9 a.m. to 3:30 p.m. For more information about sexual health clinics and the hotline, y including services, locations and hours of operation, visit NYC Health Clinics.

The ultimate source of infection was found to be imported Gambian rats which transmitted the infection to prairie dogs. There were no human fatalities, although three children were seriously ill.

This may interest you :
The federal office focused on the impacts of the climate crisis on health has no permanent staff or funding
(CNN) President Joe Biden’s first sweeping climate ordinance included the launch of…

Where is the first case of monkeypox?

Where are the monkeypox cases? Cases have been reported in 42 countries in five regions of the world, but 84% have been in the WHO European Region. “We are removing the distinction between endemic and non-endemic countries, reporting on countries together where possible, to reflect the unified response that is needed,” WHO said in the report.

Where did the first case of monkey pox in humans record in 1970?

Monkeypox as a human disease was first associated with illness in the Democratic Republic of Congo (formerly Zaire), in the town of Basankusu, Equateur Province, in 1970. Read also : Stand on one leg for 10 seconds and your health. WHO surveillance between 1981 and 1986 in the DRC/Zaire recorded 338 confirmed cases and 33 deaths (lethality 9.8%).

What was the first case of monkeypox?

Monkeypox was first discovered in 1958 when two outbreaks of a smallpox-like disease occurred in research colonies of monkeys. Although it is called “monkeypox”, the source of the disease remains unknown. However, African rodents and non-human primates (such as monkeys) can harbor the virus and infect humans.

How many cases of monkeypox are there in the world?

As global cases of monkeypox top 2,500, the World Health Organization (WHO) has issued an update on monkeypox and removed the distinction between endemic and non-endemic countries to reflect a ‘unified response’ . Today, Our World in Data reported 2,580 confirmed cases worldwide through June 19.

Which countries have monkeypox? In addition, so far this year, nearly 1,500 suspected cases of monkeypox and around 70 deaths have been reported in Central Africa, mainly in the Democratic Republic of Congo, but also in the Central African Republic and Cameroon. Few of these cases are confirmed and little is known about their circumstances.

Where is monkey pox most common?

It is mainly found in parts of Africa, but has been seen in other parts of the world. It causes flu-like symptoms such as fever and chills, as well as a rash that can take weeks to clear. There is no proven treatment for monkeypox, but it usually goes away on its own.

How many cases worldwide of monkeypox?

As global cases of monkeypox top 2,500, the World Health Organization (WHO) has issued an update on monkeypox and removed the distinction between endemic and non-endemic countries to reflect a ‘unified response’ . Today, Our World in Data reported 2,580 confirmed cases worldwide through June 19.

How common is monkeypox?

Monkeypox is rare and does not spread easily between people without close contact. The threat of monkeypox to the general US population remains LOW.

Is monkeypox in Virginia?

On May 27, 2022, the CDC confirmed monkeypox in an adult female resident of the northern Virginia region. She recently traveled abroad to an African country where the disease is known and was not contagious during the trip.

Where is monkey pox in the UK?

There are currently 8 confirmed cases in Scotland, 2 in Northern Ireland and 1 in Wales, bringing the UK total to 225. Anyone can get monkeypox. Currently, most cases involve men who are gay, bisexual or have sex with men. It is therefore particularly important to be aware of the symptoms if you belong to these groups.

Is monkeypox in England? Wednesday June 15, 2022 There are currently 504 confirmed cases in England, 13 in Scotland, 2 in Northern Ireland and 5 in Wales. Anyone can get monkeypox, especially if you have had close contact, including sexual contact, with someone with symptoms.

Where is monkey pox most common?

It is mainly found in parts of Africa, but has been seen in other parts of the world. It causes flu-like symptoms such as fever and chills, as well as a rash that can take weeks to clear. There is no proven treatment for monkeypox, but it usually goes away on its own.

How many monkeypox cases are there in the UK?